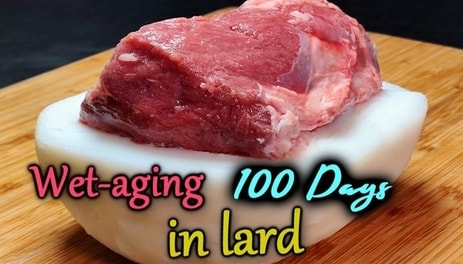 Are you ready for another experiment? We’ve been extreme dry aging beef for quite some time and the idea of extreme wet aging has never really crossed my mind. The process of wet aging is totally different than dry aging. Dry aging relies on oxygen to act as a catalyst for bacterial and enzymatic reactions. These reactions combined with the loss of moisture causes a transformation in the meats texture and flavor. This process tenderizes the beef and intensifies the flavor. In wet aging the beef ages in its own juices causing it to have a different type of enzymatic activity. Does wet aging accomplish the same thing?

Let’s find out. In my case I started by dipping a piece of rib-eye steak in some freshly rendered lard. I repeated this process (think candle making) till my meat was completely covered and all that was visible was a ball of lard.

I sealed up any areas where oxygen would enter, placed it in the refrigerator, and the process of wet aging has begun. Originally I wanted to wet age for 30 days but I completely forgot about it and by the time I remembered that lonely rib-eye steak had made it to the very back of my fridge. It had been almost 4 months later and I couldn’t wait to see what had happened.

I have to admit that I was a bit nervous not knowing what I would uncover beneath this snow white ball of lard. It was completely closed, void of air, light and kept at a constant 34F. My curiosity was becoming unbearable. I began to brace myself for the possible “putrid-project gone wrong” smell. I began to remove the lard by cutting it gently on one side. Taking special precautions to not slice it to deep penetrating the meat. I pried the fresh incisions open with my fingers and the ball of lard began to bleed. A river of blood began to flow from the cuts and although I knew exactly what was going on it looked really wild and kind of cool.

I cleaned all the excess blood away and what was left to my surprise was a rib eye steak almost exactly as I had left it. No discoloration, no foul smells, rosy red color. It looked fresh, as if I had just bought it. There was no moisture loss or spoilage. It did have a beefier smell though and smelled slightly like iron.

Very interesting indeed…. Lets get to cooking. First we want to give it a quick sear on our Lodge Cast Iron Griddle to give it that nice crust, umami flavor, and great color.

Next using our Thermaworks Dot I was able to get a perfect internal temp of 135F in the oven. The smells coming from this steak were amazing. It smelled like a regular steak that had been perfectly cooked. My daughter Keira, was the lucky one who got to play “test the crazy food dad made today” with me! Truth is we’ve been playing this game her whole life so she’s used to it. Oddly enough I think she actually likes these crazy experiments. We both found the wet-aged beef to be a lot more tender than the normal steak. It was incredibly juicy. The flavor had changed. Enhanced would be one way of looking at it but that would imply that it was made better and aging beef has lots to do with personal preference.

For a steak that has been aged 100 days in the refrigerator it wasn’t bad but it wasn’t the flavor I was looking for in my steak. It had a very mineral, iron, metallic like taste. Almost like a bloody flavor. Quite frankly I’m surprised it wasn’t completely ruined. I think that if you wet-age your beef at home keep it at 10-14 days (in a vacuum sealed bag) and I bet you will get the extra tenderness without the bloody flavor. Enjoy the video!

How to Make Black Garlic (Version 1) 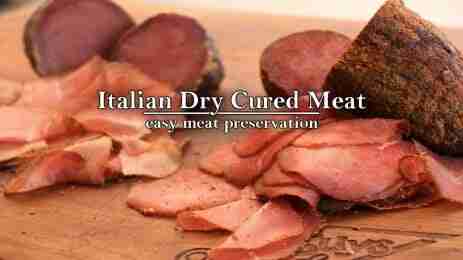 Jump to Recipe Print Recipe Post Views: 3,853 Today we are dry curing some beef in our home refrigerator. I will confess that this is not my favorite way to do this but anyone looking to preserve meat without all of the associated cost of a drying chamber, this way 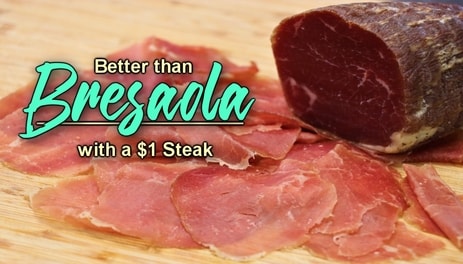 Jump to Recipe Print Recipe Post Views: 19,677 Today we are going to attempt to make an Italian classic charcuterie even better using a $1 steak. In this project we will be taking an eye of round, dry aging it, curing it, then drying it in a controlled environment. In

Want to help us out? 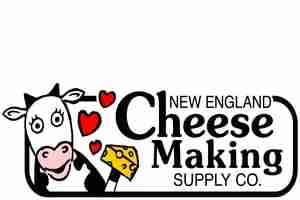 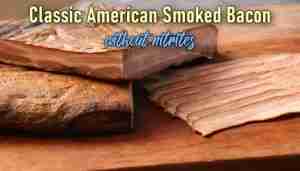 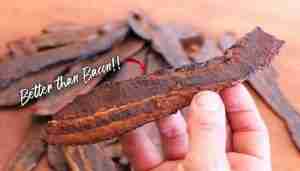 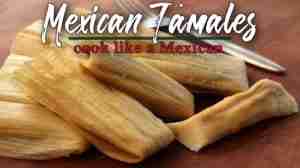 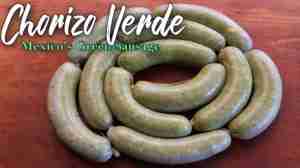 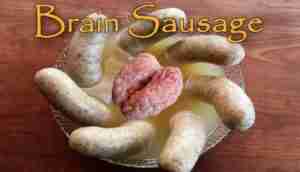